For years we’ve heard how farming in Brampton has been ruined by urban sprawl. But, on a rooftop patio, a community garden has “popped up” in a prominent Brampton building – City Hall.

Urban Agriculture is more than a buzz phrase. It includes community gardens, farmers’ markets, shared garden plots and edible landscapes. It involves growing our own food in backyard gardens, container pots and shared spaces like parks and schools. So why not City Hall? 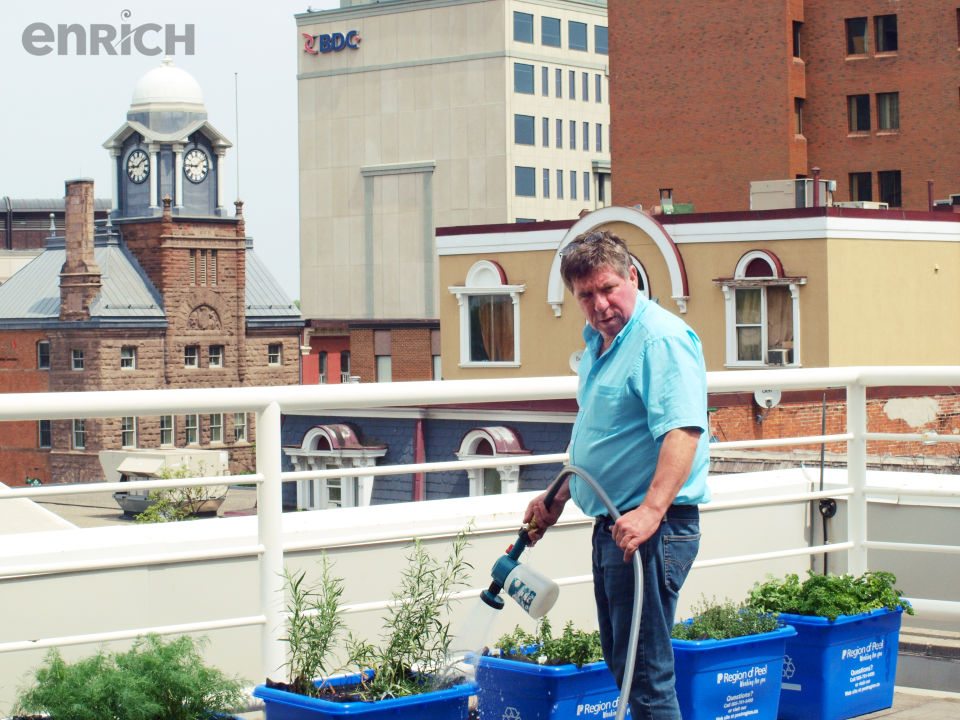 City Councillor Doug Whillans is a farmer at heart, and a green thumb by nature, who loves to garden. Whillans believes any concrete jungle can be softened with a garden, and admits that this is his first venture in container gardening. Since occupying their offices in December, Councillor Whillans and City Councillor Jeff Bowman have been eyeing the adjacent concrete rooftop patio.

“All winter, we’ve been talking about building a garden up here. Originally, it was going to be garden boxes but, over coffee one day, it came to us – recycling bins are being phased out at the end of this year. As councillors, we visit schools and talk to kids about waste and cleanups, and one of their questions was about the blue bins. This is a perfect way to answer that question.”

Contained plants require more watering than those in the ground and do best in an open spot with 6-8 hours of full sun and lots of air circulation. Currently Whillans and Bowman run a garden hose from an interior sink and are exploring using a rain barrel with a spigot. Their patio has ample sun from 8am until shade creeps in around 4pm. They are looking for some type of wind block as gusts across the 4th floor patio are very  strong. “We tried to get plants out here while still young, so they could adapt to these windy conditions,” said Whillans.

“Some seedlings came from my personal garden, but most of the plants are from Lakeside Garden Gallery, purchased with personal funds,” and we want to assure everyone that no taxpayer dollars were used in this pilot project. The blue bins were repurposed. “There are broken storage bins from moves and mortar pails saved from past renovations; we just drilled holes,” and as the deeper blue bins already have drainage holes, Whillans shows off how they wedged plywood to raise each container’s bed to conserve soil. 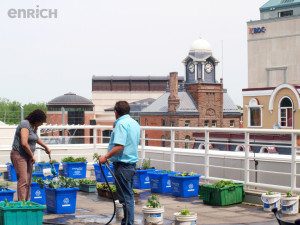 “We’re really enjoying the garden; this is something we’ve been missing for a long time,” says Ingrid Jagtoo, administrative assistant for the last 11 years to Regional Councillor Gael Miles and now to City Councillor Pat Fortini. “It’s very relaxing; the guys put the hose on and we water the plants. I have never grown a garden, but I find myself going out there just to see how the plants are doing. It’s not just a concrete patio anymore; it’s nature, and soon we will be able to reap its rewards!”

“Nothing like this has ever been attempted; it’s quite a change, and a breath of fresh air,” adds manager Linda McGuiness who has worked with councillors since 2000. “These new councillors are different; they all have their own uniqueness. I have to admit, this is the first time one has ever approached me saying, ‘Smell this!’”

Not only are staff laughing more, both Linda and Ingrid are amazed by how much they are learning. “I never knew garlic grew like green onions,” shares Ingrid. “I’m from South America, and there are three plants in this garden which are from my part of the world, including bitter melon. Once they start growing, I’m going to cook for everyone,” and she’s beginning to figure a way to wheel in a BBQ!

Will this be more work, maintaining two gardens, one at home and another at work? Whillans offers, “This is a community garden, giving people like Ingrid the opportunity to have a garden, and it’s maintained by everyone in the council offices. It’s also a personal challenge, to see what can and can’t grow. I like to try things; if it fails, I won’t do it again. We have over 35 different vegetables and herbs out here. Let’s see what happens!” 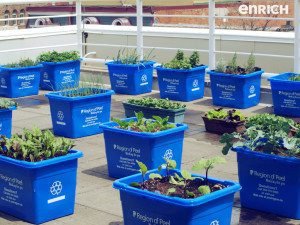 And how adventurous is his palate? Whillans’ ancestors have been in Canada since 1697 so, theoretically, his taste preference should be bland. “My father was a third generation farmer in the Ottawa Valley before moving to Brampton in 1958. He was always big on multiculturalism as he recognized the need for it. Even back in the 60s and 70s, with the Portuguese, Italians and early South Asian settlers, he encouraged us to try new things. I’m always interested in the ingredients and the spices used with every new dish I try. I’m not saying I like all cultural foods, but I do try everything.” Conversation turns to the importance of “the two bite rule” and how parents today should encourage cultural food experimentation with their children. “I never had callaloo. I heard about it in songs and from Caribbean friends. Now, I grow it in my home garden along with okra, which I lightly batter and fry in light oil; I love it!”

“Some of the peppers we’ve planted are unique. I have to compliment Vince, Dominic and Mike at Lakeside Garden Gallery – with all their Caribbean and South Asian clientele, the selection of peppers alone is incredible. Five years ago, the hottest pepper would have been habanero. Today I have a tough time picking between scorpions, ghost peppers and Carolina reapers. In this garden we’ve planted chocolate 7 pot chili peppers.”

So, how will this urban garden grow throughout the summer season? Will the strong gusts of wind become unmanageable? Could we incorporate milk crates and other non-traditional containers?

Do you have an urban garden to show off? Follow us as we explore urban gardens across Brampton.