Canadian businesses with busy Shipping & Receiving departments have a higher risk of cargo theft. Transportation terminals are one of the most vulnerable components of any business operation because it can be difficult to coordinate monitoring. A busy product distribution center has a multitude of goods and people flowing through their open garage doors from dawn till dusk. 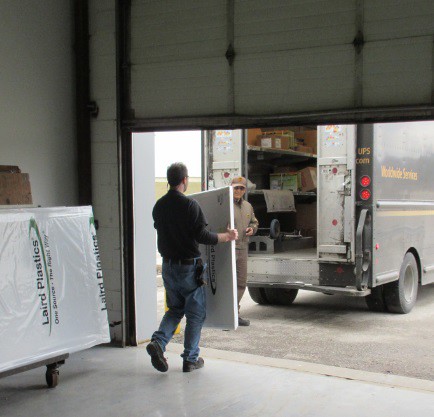 If the contents of boxes are confusing to operations managers, then the data sheets will likely be incomprehensible to 3rd party investigators, and criminals thrive in well orchestrated chaos at corporate loading docks. The notion that ‘management can’t watch everyone all the time” greatly enables dishonest employees inside any organization. Diminishing this concept by making security systems more obvious can breed a more secure Shipping & Receiving department. Simple technology solutions exist that can help business owners greatly reduce their overall risk of theft, and a smart, easily monitored security system with video surveillance can eliminate theft at the garage door areas entirely.

On March 17th 2016 Brian Mcleish of Guru Security in Toronto gave this author an inside look at a recently installed security system at Laird Plastics, a major plastics distribution center in Brampton. Initially contracted by Pete Cowan the warehouse manager, the focus of the project was to increase building security, staff accountability, and generally get a better handle on what’s happening around the garage doors in the Shipping & Receiving department. The solution was a simple two pronged approach; Brian deployed magnetic contact switches on all the perimeter doors and windows, and installed a high-end video surveillance system with 32 cameras. He created a comprehensive IP network camera array which can be managed at the local monitoring center in Pete’s office.

Brian McLeish walked through the whole set-up to show how thieves really are at a disadvantage in the age of infrared video surveillance systems. The eyes in the ceiling are always watching and can remember everyone’s every move for a month. With proper set-up, the system can store thirty days of video which allows Pete to backtrack and compare recorded events over time.

Brian actually started the tour outside in the parking lot to share the perspective of a potential thief looking to break into the facility. He pointed out the exterior cameras and the magnetic switches on the windows. He stopped in front of the large garage doors in the loading bay.

“These are solid metal panel insulated garage doors and when they’re shut there’s no weakness to exploit. There is no window to punch out to enable fishing attempts, or any seams that would yield to a crowbar or pry tool. A thief would have to cut through the door and that would take a coordinated assault crew about fifteen minutes.” Building owners can add horns and lights to the alarm system which has the dual benefit of scaring thieves and eclipsing the warning sounds of an immanent police response.

High security installations seek garage doors made with the thickest steel possible, and very sturdy models are available from manufacturers of both sectional doors and rolling steel doors. The thicker the sectional door, the more insulation it has and the better security it gives. The rolling steel door gives very good security but generally has poor insulation. They are available insulated, but are still not as energy efficient as sectional doors. Heavy steel doors can crush a man to death, so these models are often equipped with bottom safety edge sensors that will retract if the door hits something, or with a laser eye that will stop or even reverse the door’s downward motion if anything breaks the beam..

Brian’s friends at McKee Horrigan garage door installers added, “For higher security with the sectional doors, we would build the door with a heavy gauge of steel on the outside face. We’ve installed high security doors as described at the RCMP headquarters in Newmarket, and at the old Target warehouse in Milton. The doors can be locked with a slide lock which will take a padlock if desired. They can also be locked by the electric door opener. The doors can be wired up to sensors which will alert the owner if the door is operated after hours, or will set off the alarm if not authorized for entrance.”.

Another security element being added to modern warehouses is aluminum rolling grills. These grills are not just for shopping malls anymore. This upgrade is perfect for hot buildings where the workers like to leave doors open for ventilation. A grill behind a garage door adds immense security and air conditioning flexibility. The screens also keep animals out including birds which are a real nuisance in older buildings.

Brian McLeish went on to explain how cutting open the garage door wouldn’t necessarily trip a perimeter alarm system. Its not like forcing a window open, or opening a door, even with a key there is a delayed alarm. Once inside the entrant will certainly trip an infrared camera alarm and will then have just sixty seconds to disarm the system at the panel. So just because an assault crew can break and enter into the building without tripping the perimeter alarm, it doesn’t mean they will be successful. Thieves will likely trip a motion detector alarm within seconds of illegally entering the facility.

“Most security systems in warehouse operations are two fold.” Brian explains. He pointed at the magnetic contact switches above all perimeter windows and doors, and showed how this information is represented on a security panel which displays at a glance where the building is secure, or where doors and windows have been left open. This is the first line of defense. 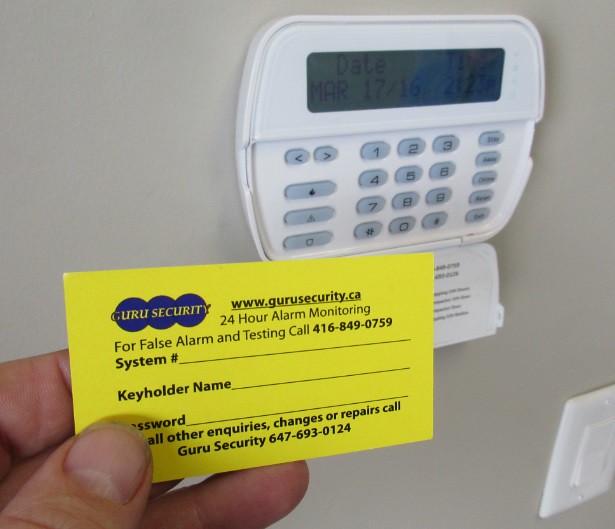 A green check mark on the alarm panel lights up when all doors and windows are firmly closed, which is the only way the system can be ‘armed’. In the morning, the first entrant must use a key card or punch a key code to disarm the mechanism or else police will be dispatched!

The second part of the security equation is video surveillance. As you can see below, the video security system Brian installed allows Pete to view camera feeds on his smart phone. As soon as an alarm sounds at the plant, Pete’s mobile will ping him and request he take a look at the incident as its unfolding live at the facility. He can watch if its a robbery in progress, or just a false alarm. And if it is a false alarm, the technology also saves Pete having to drive back to work to reset the system. 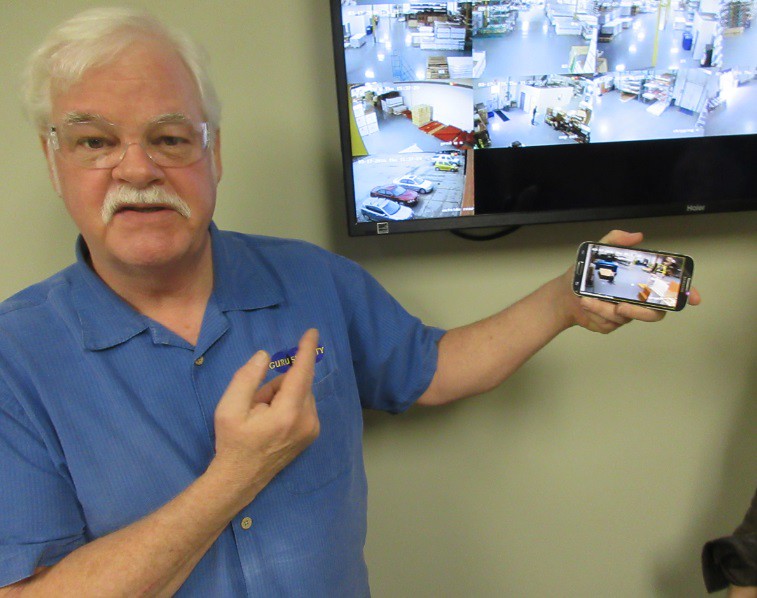 Brian was proud of the virtual security omniscience he created, Now with the touch of a button Pete and other managers can see every nook and cranny of the warehouse on their phones or desktop computers. They also have the ability to search through the recorded memory of 32 different camera feeds recorded on NVR with video storage capacity of 30 days contained in two 4TB HDD. The network uses 3 Mega Pixel cameras which display in 16/9 format for a wider area coverage. These cameras have a much larger depth of field with sharp focus that makes ‘recognition quality video’ to help managers distinguish between staff members and strangers in the building. 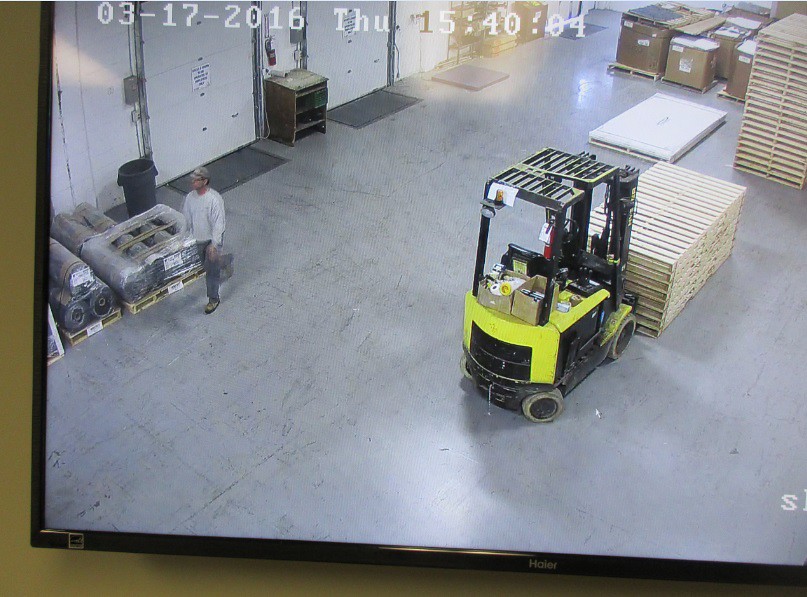 At the end of the tour, Brian pointed to the alarm system stickers on the glass by the front door and explained how would-be intruders hate sophisticated alarms systems, because not only can video be used to catch them, and prosecute them, but it will almost certainly be used to depict them as bumbling crooks for internet infamy forevermore. “Fear of embarrassment is a very significant deterrent.” In that respect, Brian postulated, security technology is bringing back the idea of individual honour in a society where nobody can be truly anonymous anymore.