It is incredibly difficult for one person to create change alone; but when you work with your community, you can accomplish anything. In fact, when groups and communities come together, amazing things can happen. It’s especially remarkable when it happens at a young age, and within the education system in our city. 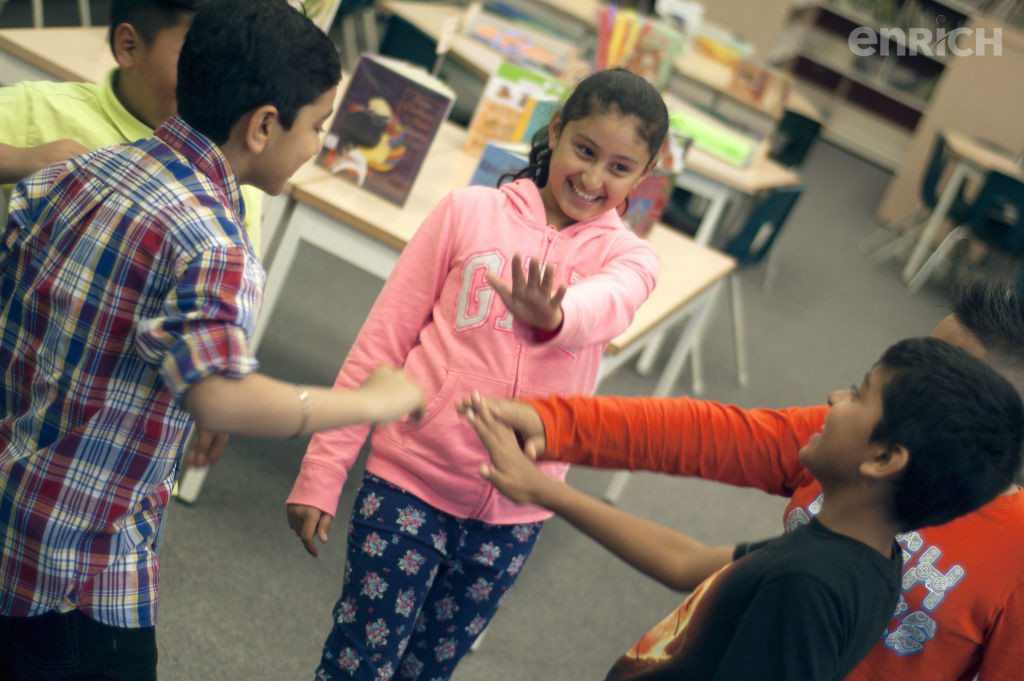 Gurleen Raji, a grade four student from Hickory Wood Public School in Brampton, brought an ambitious idea to her teacher, Heather Borthwick. Gurleen saw on TVOKids.com that the Toronto International Film Festival (TIFF) had a Kidsfest contest for short videos. There was a category for Grades 4 – 6 with the theme of anti-bullying, and Gurleen had a script idea which Ms. Borthwick encouraged she present to her class. There was immediate excitement and, although reluctant to give up recess for rehearsals, and disputes over which roles people would play, 13 of her classmates joined in the making of “BBN: Ban Bullying News,” a four-minute documentary investigating school bullying. Once it was completed, they participated in the Jump Cuts Young Filmmakers Showcase and at the TIFF Kidsfest Award Ceremony on April 19, 2015, they won the Frederick Simpson Award.

Their short movie followed the “Bully Busters” as they confronted the bullies of the school and took them down with their “stopping hands.” There were many students in this group who had been victims of bullying themselves and, together, they came up with solutions for what to do if you are being bullied. “You can walk away,” offered Sahib Johar (bully buster), “Let it go in one ear and out the other,” adds Amrit Mandier (news reporter). “Bullies should not fight and should  … just stop their actions and bad stuff that they are doing,” said Rachel Adams, who played a bully in BBN. The power to stop bullies is in your own hands, as Jasmeh Deol (news reporter) states, “Don’t listen to what they’re saying and just walk away.” Walking away is the hardest part because a bully usually wants you to fight back. If you don’t play, they go away.

“I was thinking about ways to tell kids about stopping bullying and we thought of the news channel, thinking that would be really cool,” explains Gurleen when asked how her vision, together with her team, achieved something great. What would a world look like without bullies? For William Dao (bully buster, film editor), “Then it will be a peaceful world … no fighting, no more wars.” Rachel shouts out, “It will be like Candy World!” Amongst the laughter, Abhay Ratti (bully buster, film editor) weighs in, “I think it will happen one day, but it might take some time. And if it does, the world will be totally different. It will be a lot, you know, more calm and more people will be nice, and stuff like that.”

But reality sets in during this philosophical discussion as Aravend Thavakumaran (student being bullied) points out, “It will never end. Bullies come every day and no one is truly going to stop it.” Even if one day there were more nice people and less bullies? Gurlal Sidhu (bully bro) states,  “There might be another civilization of bullying, that’s what happened in the past, and will happen in the future.” Gurleen adds, “I think, as technology gets better, there will be more cyber bullying.” But we’re noticing this generation is getting more away from technology and returning to dialogue. They are getting more personal. These kids have got the right idea. Sahib adds, “It’s more relaxing talking live versus over technology.” Ali Butt (news reporter, bully buster) adds, “It’s better to talk in person, and see the feelings you have when talking.”

Wise words for those who are only in grade four.

“There is so much togetherness in this group; it’s all about teamwork,” says teacher Heather.  “Anyone who wanted to participate was able to, whether they were top of class, bottom of class, great at math or not great in English; whoever wanted to do it, got to do it.” Heather’s good friend, French teacher Kerry Black confirms, “The kids did all of the work; all their teacher had to take care of were things like permission slips, arranging transportation, providing supervision and project coordination.” Though it still sounds like a lot, the important part for these teachers was seeing a group of 13 classmates, who weren’t necessarily friends, work collectively and accomplish what they did. Their award was just a reward, because the lesson they learned was even greater. Today, technology is in the forefront. The school system is here to help kids take initiative, bring ideas forward, and they help facilitate them. It’s all about empowering the kids.

These kids are tomorrow’s leaders of the world. It will be up to them to carry on the legacy that they have started. It took just one class, one group of 10-year-olds, to bring one person’s vision to life. It will be fun to see what these kids will achieve when they become adults.

The classmates all left with a question burning in their minds … What’s next? Next year, these students may be in different classes. But while their “Bully Busters” team may be divided, we hope they will continue to live out their legacy and work with others to push for a bully-free world.